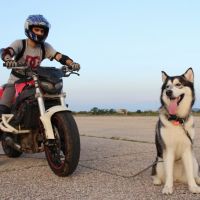 A GANG of bike thieves from Bristol are using Instagram to brag about all the bikes they've stolen from the city.

The ‘Bristolbiketaker’ Instagram account, which is currently set to private and has over 7800 followers, contains over 100 photos of stolen bikes.The thieves frequently appear in pictures with the bikes, with faces obscured by emojis or hoods and balaclavas. They also post videos of themselves riding the bikes.The account description reads: ‘They call me Mr steal your bike Jail rider / Bristol we take everything and anything.’

A motorcyclist whose Triumph Street Triple was stolen from a North Bristol shopping centre car park says he saw it on the Instagram account before it was later recovered from a disused quarry near.

Avon and Somerset Police has said it is ‘aware of the social media account’ and that its content is being actively investigated.

3
0 1.1K
Comments
Please sign in. Comments can be posted only by registered users.