When I bought my swag (A roll up canvas tent/sleeping bag thing for the non-Australians) the camping shop in Adelaide sold me on the fact that the mesh was so fine that non even the smallest gnat could get through. I should have asked more questions because it didn't mention the smallest of ants which invaded my sleep cocoon in force last night. They were not the bitey kind but more of the crawl all over you and annoy you variety. So after unsuccessfully trying to rid my swag of them in the morning I just left it in the sun and figured they would crawl out when it got too hot. Success.

Today I had my big "swimming with the sharks" tour and I arrived early to make sure I wasn't left behind. I know I should have tried on the gear but I just grabbed the wetsuit and fins that looked right and jumped on the boat. It turns out the fins were too small and the wetsuit too big which meant my toes went numb and my wetsuit blew up like a parachute when I swam forward. When the first shark came up to the boat we jumped in off the back and everyone kicked and thrashed until there were so many bubbles I was blinded. Being the calm one in the group I just floated there and let everyone move away from me which worked perfect with half the group going left and the other half right. When the water cleared I saw why they were all moving because a 21 foot whale shark was swimming straight at me and was about 5 feet away. Instead of pointing my GoPro straight at him like I should have I spread my arms and legs apart like a starfish and convulsed in a weak attempt to get out of its way. It turned at the last second and at that point I think I got a nice video of the side of him as he cruised past. I did much better on on my next times in the water and had one instance where I was able to swim along the side of a big one for a few minutes while the rest of the group was left in the dust. It was pretty impressive to be alone in the open water with them when one of their fins was larger than my whole body.

After a great day on the boat I slowly packed up my bike and left Coral Bay. It is a small beach town with a great atmosphere and the Ningaloo Reef just off the coast with all the fishing and diving opportunities you could want. I rode East out of town for about an hour and camped in a dry riverbed near the Giralia Station. It would have been a great spot except for the flies. They were so bad that I ate my dinner while walking into the wind as fast as I could to keep them from landing on my food and going in my mouth. As I was typing this up a large unidentified bug landed on my neck and I decided to retire to my swag. It was 7 PM so I got plenty of rest. 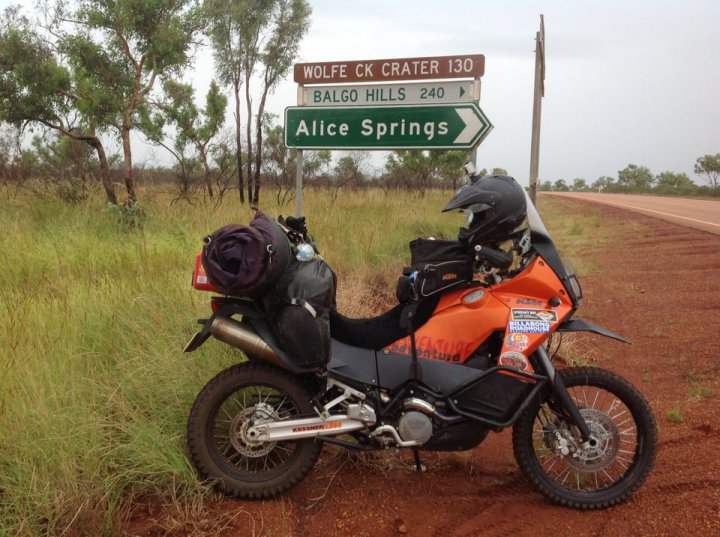