At the moment, the website is only a demo version of the app, so some of the features are missing or unavailable. Install the app to access all features.
HomeBlog by Frank TripleDucati Panigale V2 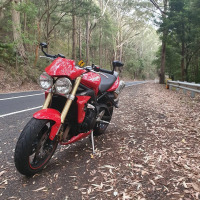 The Ducati Panigale V2, the little brother of the V4. Well if you can call a 955 powered Ducati little

On that topic of looks, the V2 clearly has more Panigale DNA than ever, now with a single-sided swingarm and full-LED lighting. Gone are those awful twin pipes replaced with a low slung single exhaust. A full TFT dash also compliments the V2 sleek new look. By all reports the V2 seems to be the easier of the recent Ducati's to live with, unless you want and out and out track weapon.
The V2 looks to carry on Ducati’s V-twin superbike legacy, while producing the most power ever from a midsize Panigale. A competent companion? I would think so. FrankTriple ✌🏍