At the moment, the website is only a demo version of the app, so some of the features are missing or unavailable. Install the app to access all features.
HomeNewsCustomYamaha DT250 by One Down Four Up

Yamaha DT250 by One Down Four Up
5d ago Custom

Every year, hundreds of custom motorcycle lovers descend on Portland, Oregon, for the One Motorcycle Show. This year Wayne Corbett and Gabrielle Jones of One Down Four Up made the trip, and left with a trophy. 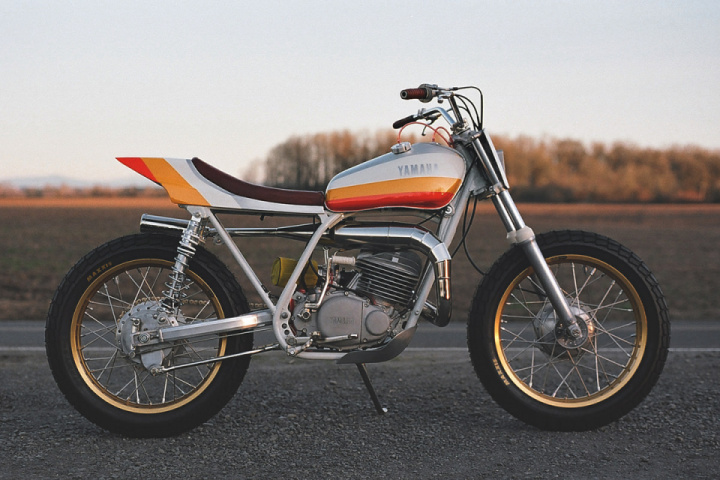 They trekked north from their headquarters in Redding, California, to show off Gabrielle’s new ride: this stunning 1975 Yamaha DT250.

“We originally bought the bike for Gabrielle to turn into her daily driver,” explains Wayne. “But we sat on it for about a year, waiting to find the right inspiration.” 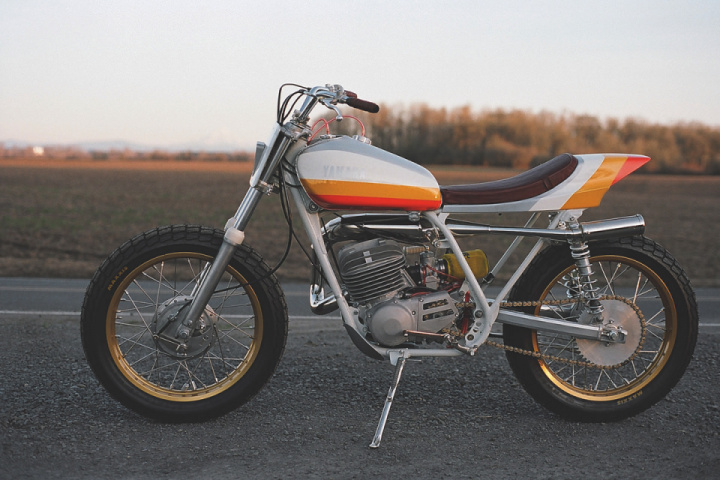 “Then we ran into an old flat track racer around town. He let us dig through his barn full of old race bikes and parts, where he pulled out his old riding helmet from under a dusty OSSA frame. It was an old Bell Star painted in a yellow, orange and red color scheme; from there the design was born.”

Between the two of them, Wayne and Gabrielle handle all design, repairs, fabrication, upholstery and photography in-house. With fresh inspiration, they decided to turn the Yamaha DT250 into a flat tracker—taking additional cues from the AHRMA vintage flat track class guidelines. 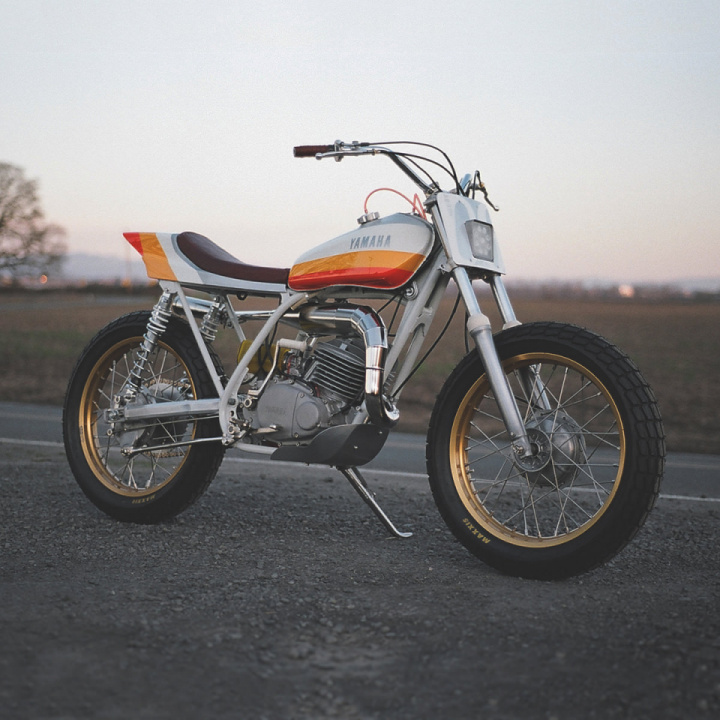 Since the DT250 would run primarily on-road, a balance had to be struck between performance, reliability and practical considerations. One Down Four Up gave the engine a refresh—squeezing more power out of it by re-jetting the stock carb, and fitting a K&N filter and a tuned, nickel-plated Circle F expansion chamber. According to Wayne, “it’ll pull the front up in almost any gear.”

The stock oil injection pump was retained and a new oil tank installed below the fuel tank. (Look above, and you’ll see the extra oil cap poking out behind the steering stem.) This new set-up lets Wayne and Gabrielle fuel up anywhere without having to mix gas or carry extra containers. 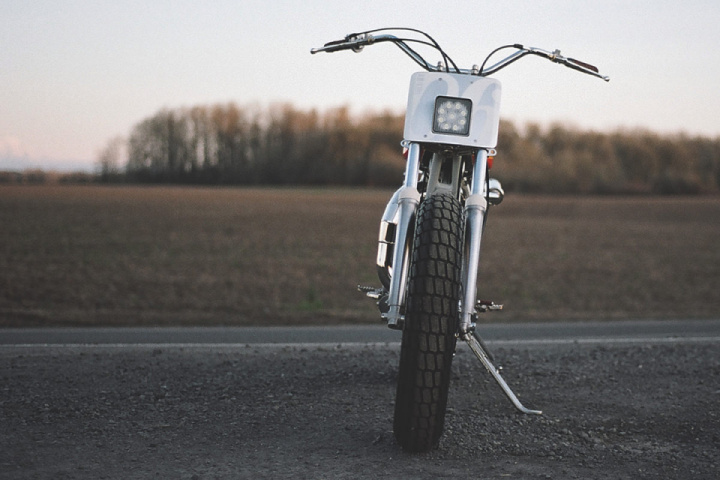 The electrical system has been upgraded via a 12-volt alternator, with an integrated electronic ignition. This allows the team to run LED lights at both ends. Hiding under the seat is an Antigravity 4-cell battery.

To upgrade the suspension, One Down Four Up bolted on a Yamaha XS650 front end—splicing the XS triple trees with the DT’s steering stem, and upgrading it with tapered bearings. Later model 35mm XS forks were chosen to accommodate chunky dirt track tires. 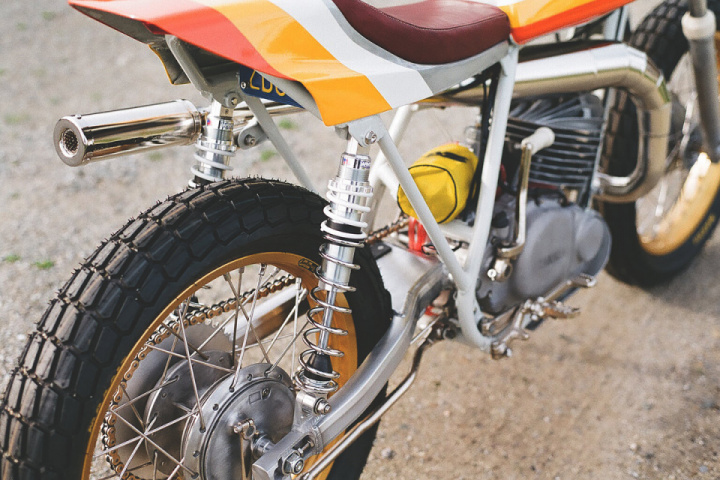 Out back, an aftermarket Yamaha SR500 swingarm was modified to fit the DT250, simultaneously bringing down the bike’s weight and extending its wheelbase. Fellow Californians Works Performance supplied a set of custom-built shocks, which included offset eye mounts to accommodate the difference in width between the frame and swingarm. 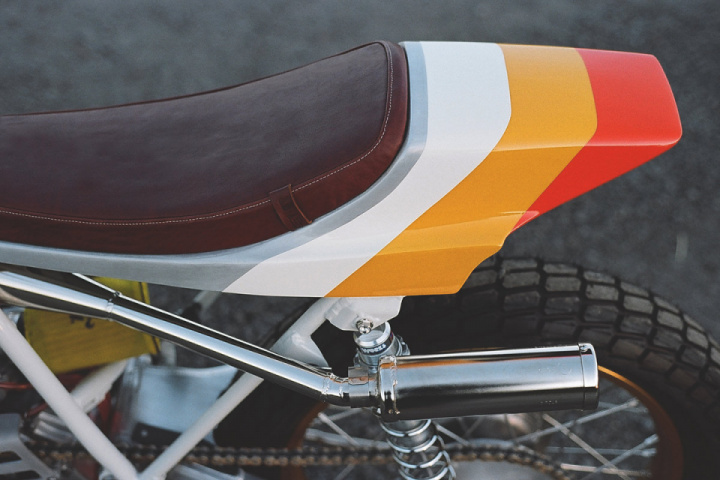 When it came to tackling the DT250’s bodywork, One Down Four Up set out to shed as many pounds as they could. They fitted an aluminum TT-style fuel tank and fabricated an aluminum tailpiece, modifying the subframe to support it. Brown leather was used for the seat and carried through to the grips. 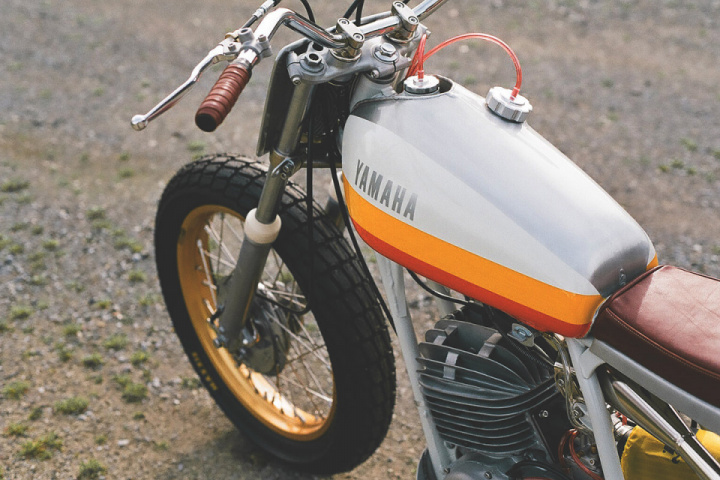 As a nod to the old Bell that inspired it, the Yamaha DT250 was finished in a delightfully vintage white, orange and yellow scheme.

We love it and so did visitors to the One Show: Gabrielle’s flat tracker walked away with the People’s Choice award at the event.

A few more tweaks, and it might start appearing at the local racetrack.