BMW Motorrad announced that the new BMW S 1000 RR will be entered in the FIM Endurance World Championship last year, just prior to the start of the 2019-2020 season. 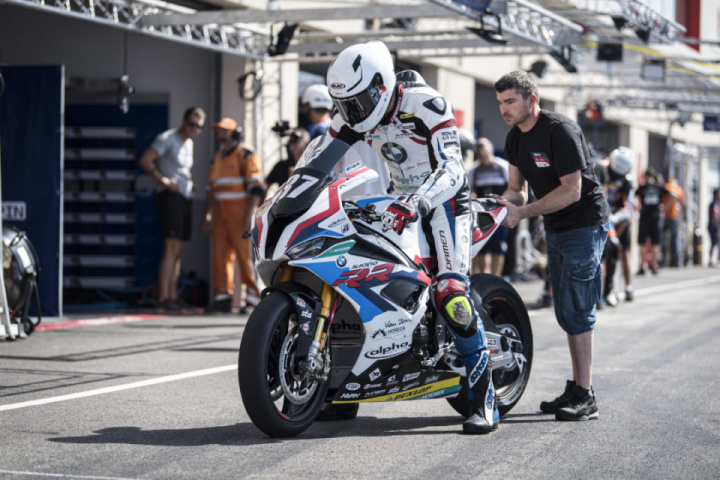 The decision seemed to have justified itself when the team finished third overall in the season opener at the 24-hour Bol D’or race in France.

Who wouldn’t want to see the bikes up close? Well, we were given access to the team’s pits and bikes, thanks to BMW Motorrad Malaysia.

We were surprised how “open” all the teams were in FEWC. There was no giant separators to hide the insides of the pits, bike parts were in the open, riders walked about nonchalantly without being mobbed. 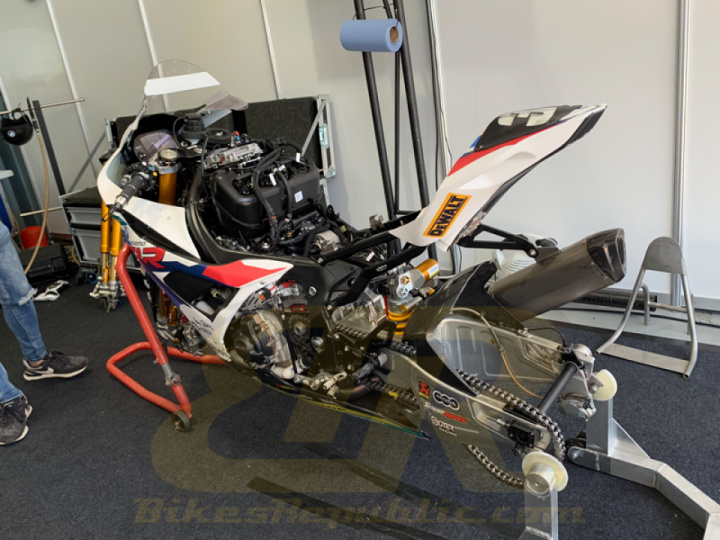 Walking into the BMW pit, there were fuel tanks on top of a transport case. These tanks feature extensions underneath and to the rear. The rear portion is placed under the rider’s seat. A 24-litre capacity is allowed in FEWC so the teams need extra space to store all that fuel. 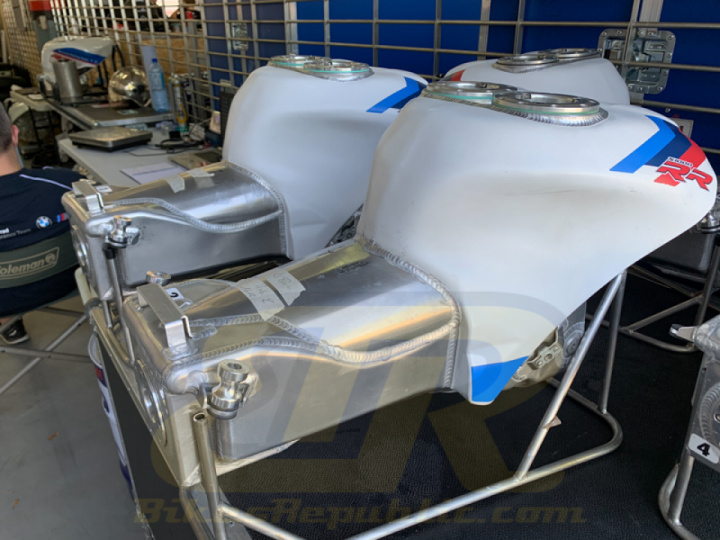 But sitting right there in the middle was a stripped out 2019 BMW S 1000 RR. It was sitting on paddock stands without its wheels, seat cover and fuel tank. 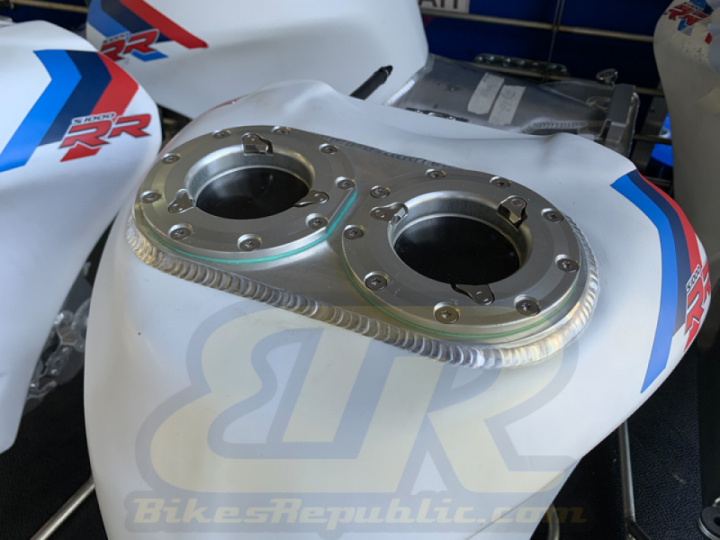 Since refuelling need to be lightning quick, all teams use the dry break refuelling system. There are those with two couplings, the rest are with single couplings. Why two holes? Air from the tank exits through one hole while fuel flows through another. Doing this speeds up & the fueling process. 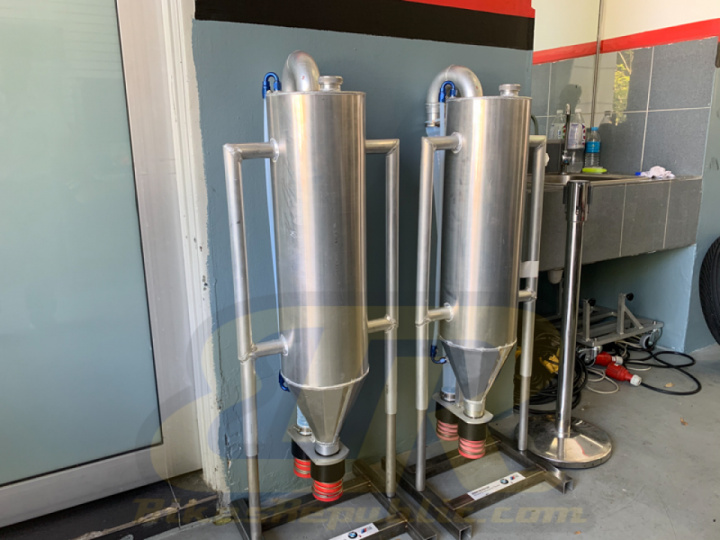 Team manager Werner Daemen greeted us and went on to explain about the bike. (Greeted by a team boss? Never happened in MotoGP.)

There are pitstops for fuel, tyres and rider change (and also crashes). As such, every attachment on the bike is made for quick release. Both wheel axles/spindles needed only three turns to be extracted. Consequently, tyre swaps take only 3 seconds! 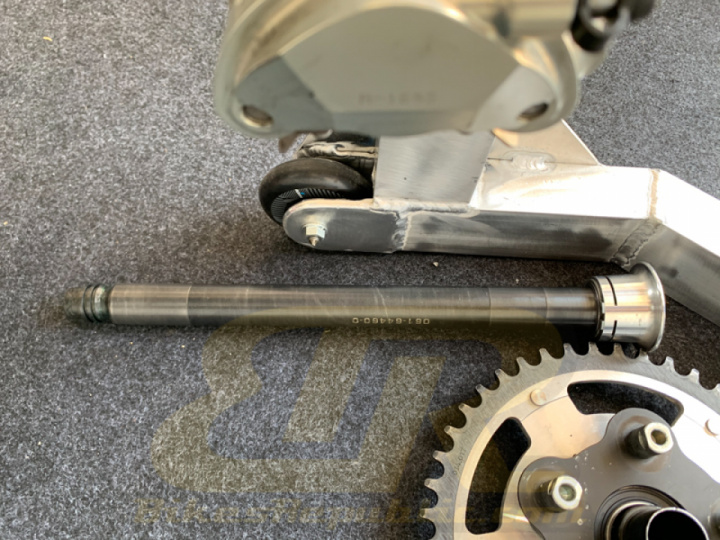 The footrests, foot pedals, clip-ons and levers are also quick release systems. Their cable and hose attachments have quick-release couplings that can be twisted on and off. 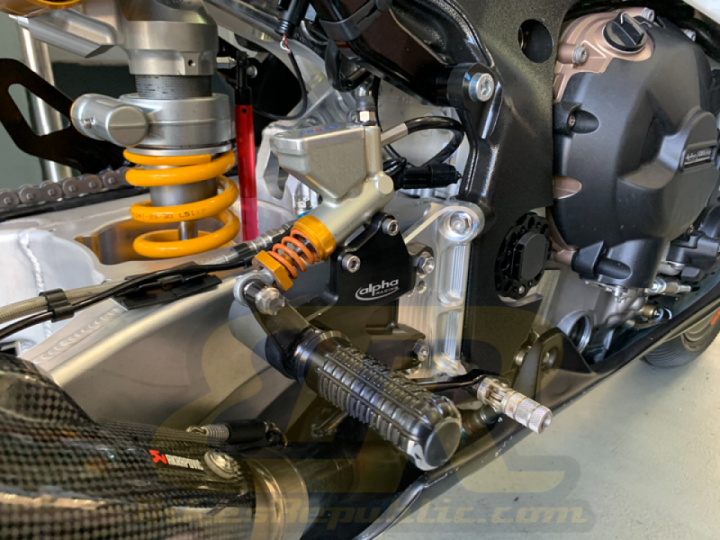 Looking at the handlebar, there’s a button which says “START.” Yes, the bike’s starter is in place. That’s because riders will line their bikes on one side of the track, then run over from the opposite side. They then have to start their bikes and get going. This endurance tradition lives one. 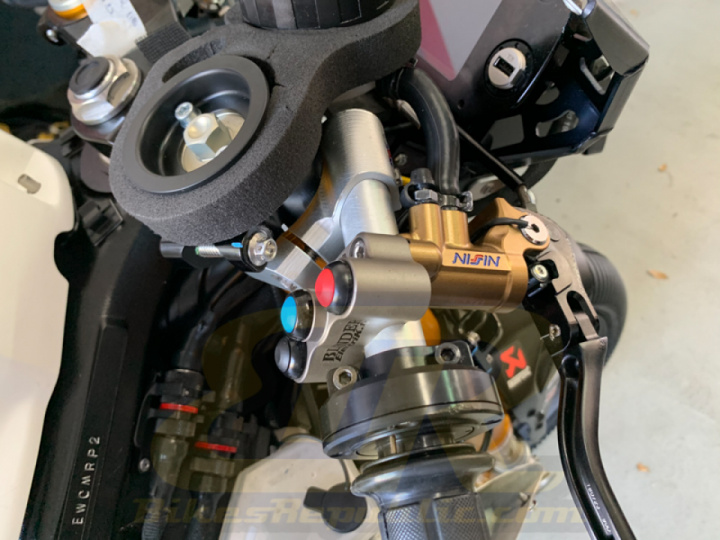 Daemen pointed out the brakes. The team uses Nissin brakes instead of the usual Brembo. We’ll leave the good/bad arguments to the riders but it shows that there’s room for other manufacturers to shine in the FEWC. 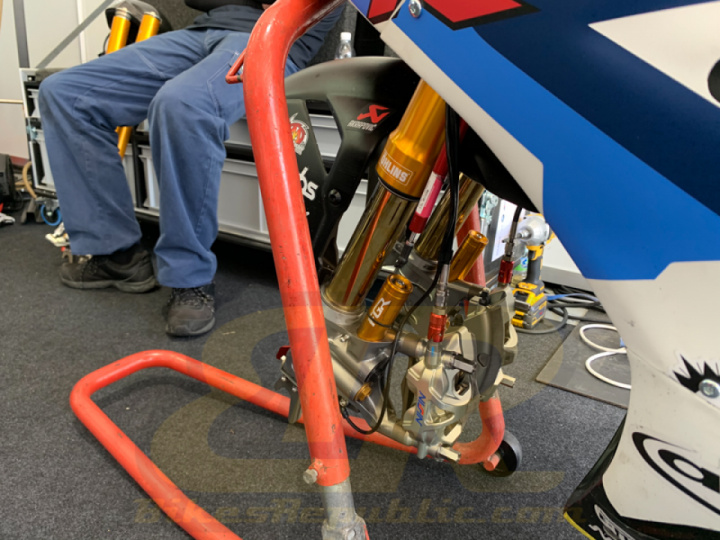 We noticed the gorgeous swingarm. A closer inspection showed that it’s made by Suter, who were once involved in Moto2 racing. 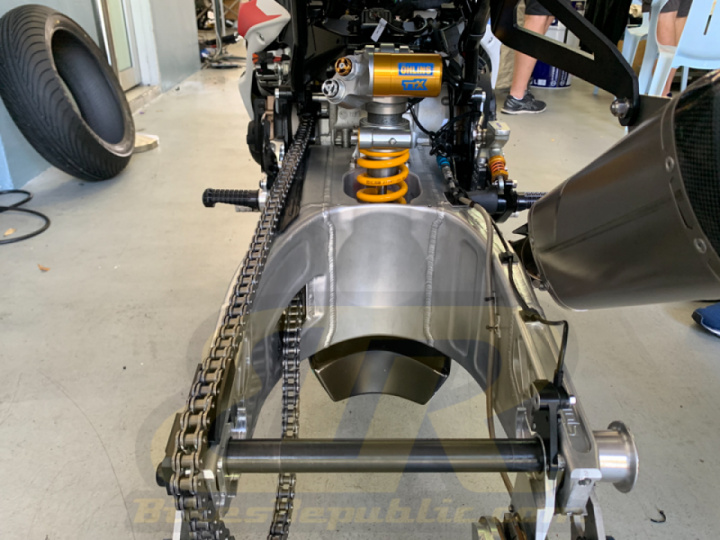 Suter also makes the swingarm for the BMW S 1000 RR HP4 Race, but the swingarms on these race bikes were custom made. 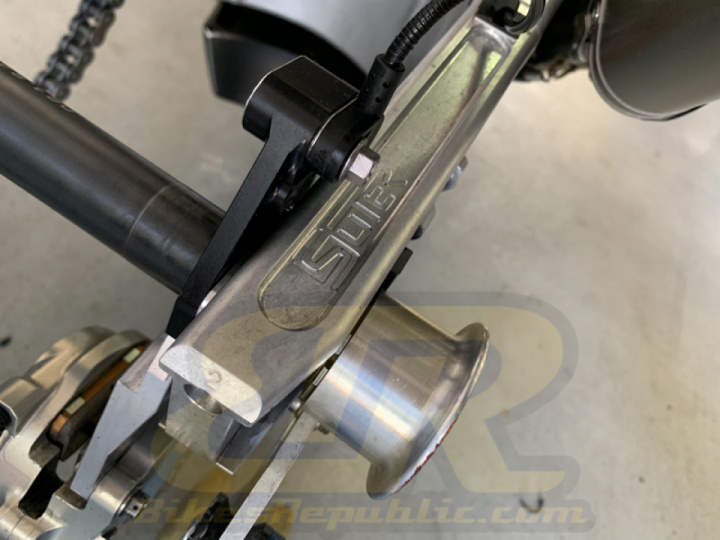 We walked over to the other two bikes. One was crashed yesterday and the rider suffered some shoulder injuries. 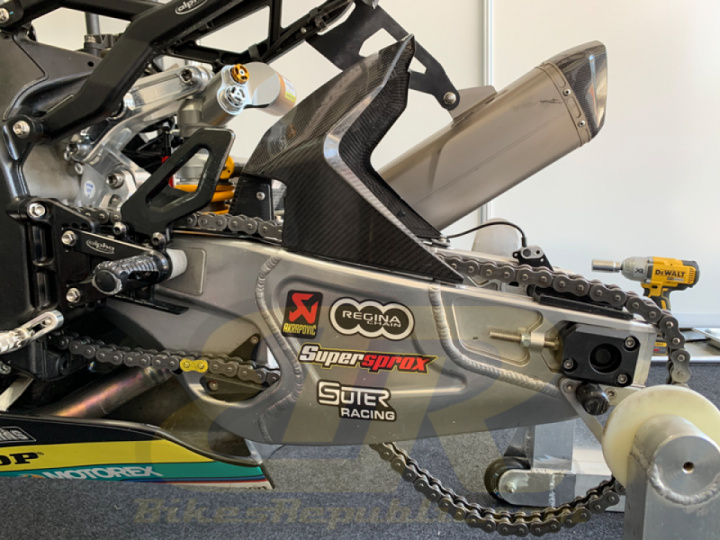 Here, we could look right into the engine compartment. The huge airbox was still attached and the ECU sits atop it. The ECU is available to BMW customers who wish to race in endurance. However, instead of unlocking more of the engine’s power, it’s programmed to provide better fuel efficiency and engine reliability. Endurance racing is about strategy and who can be the fastest on a consistent basis, rather than an all-out horsepower battle like in MotoGP. 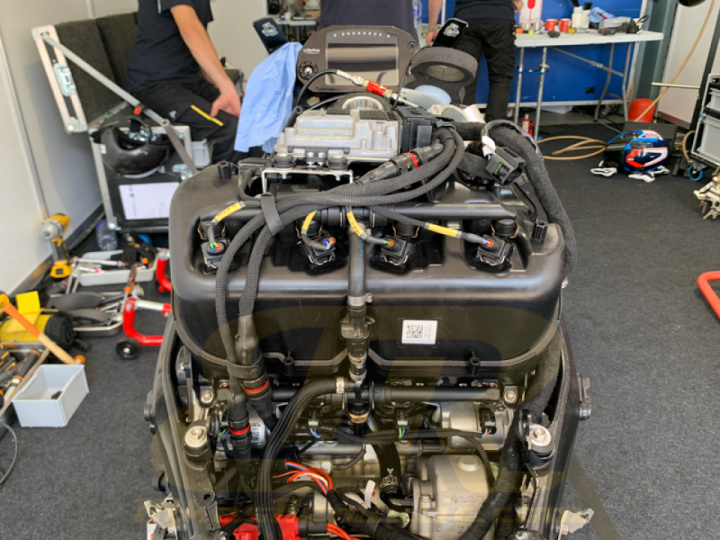 The rep explained that the riders love the new BMW S 1000 RR engine as it produces a lot of midrange torque. He says that this is due to the BMW ShiftCam variable valve timing/lift system.

It’s this midrange grunt that propels the bike and rider out of corners, not top-end horsepower. If you look at SIC’s layout, there are only two areas that require high horsepower i.e. the rear and front straights, while the rest are made up of short “chutes” leading into other corners. In fact, the torque helps the bike to build speed much quicker when exiting corners, translating to higher speeds down the straights.& 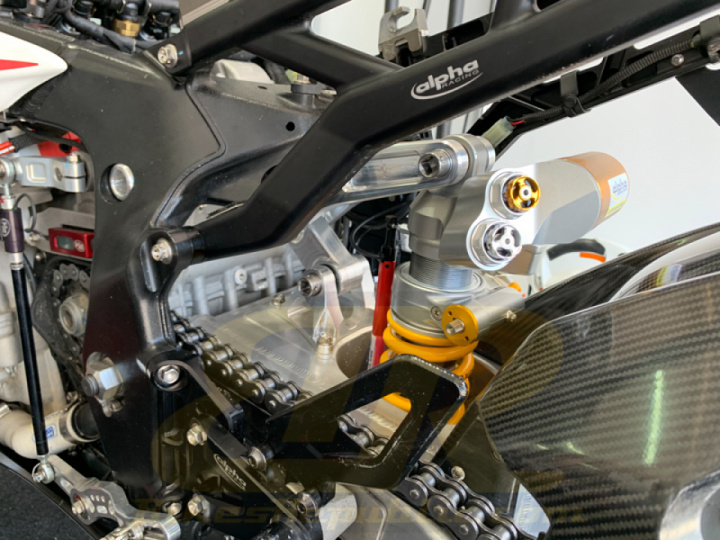 It has to be said here that the FEWC is a production-based series. That means the racebike must be essentially be the same as the homologation street bike. It also means that the engine architecture and capacity; frame design and material must be exactly be the same. 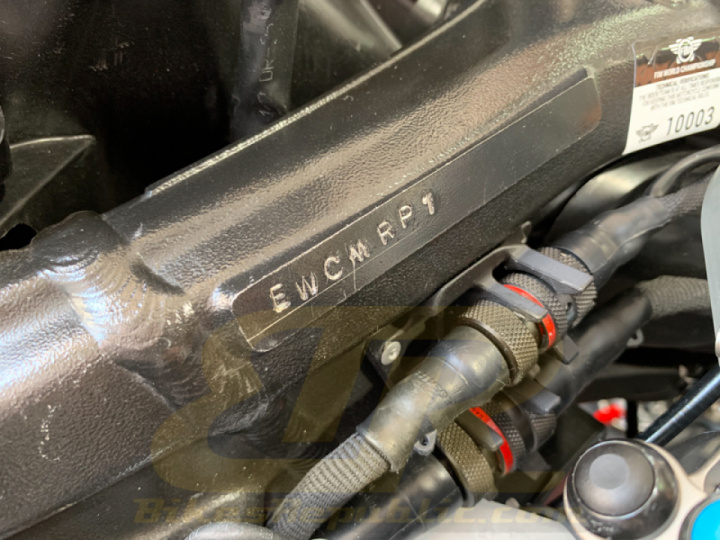 The FIM scrutineered the bikes and stamped the parts such as the frame. 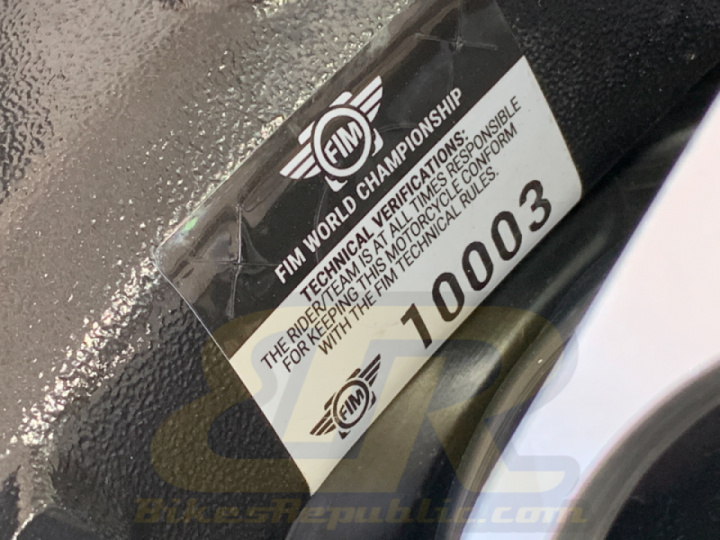 As we mentioned before, the FEWC is where a proper tyre war takes place. This is where Dunlop, Bridgestone and Pirelli duke it out to produce the best tyres in terms of grip and durability. 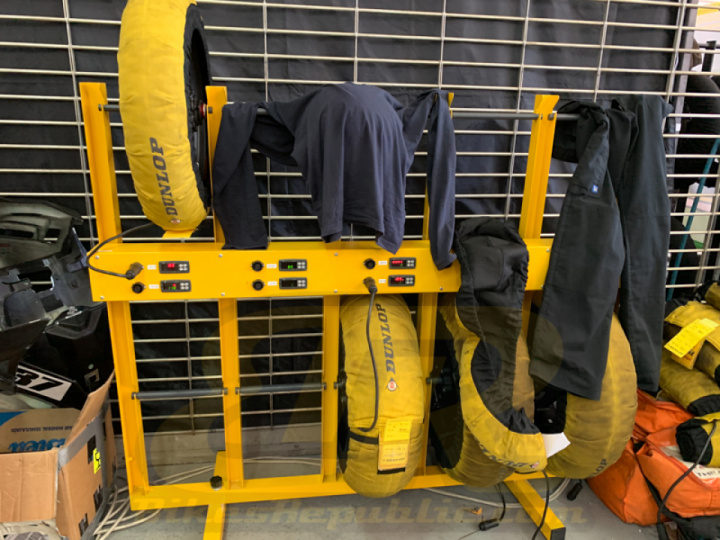 The overall objective of all these rules is to encourage manufacturers to produce bikes and products that the buying public can benefit from.

The second round of the season is now in Malaysia at the Sepang International Circuit. Called the 8 Hours of Sepang, the race will play the role as the qualifier for the Suzuka 8 Hour season-finale for “part-time” teams. It means that these teams will compete alongside the regular teams of the FEWC.

So do make your way over to the Sepang International Circuit for this grand event. More details on the SIC webpage. 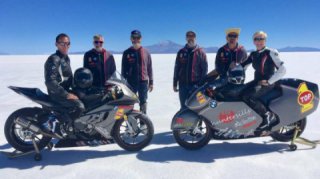 BMW S 1000 RR broke the record for fastest BMW Motorcycle at 242 MPH
34577
After a rather dramatic experience at Mike Cook’s Top Speed Shootout in Bolivia, the Hunter Sills Racing team is walking away with an official speed record (pending FIM ratification) and an unofficial speed record.The HS... 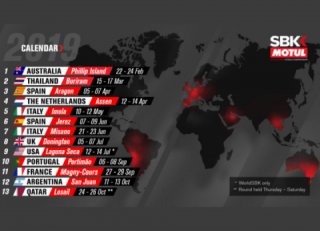 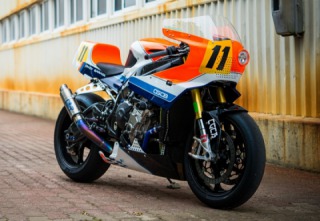 BMW S1000RR by Crazy Garage
3719
Modern superbikes are technological and advanced, and would easily win racers of yesteryear. However, the old technique attracts visually.If you want a modern motorcycle in the style of the 80s, here’s a solution. For in... 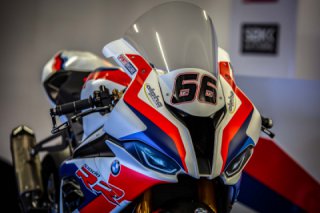 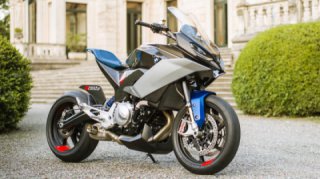 BMW 9Cento Concept with the BMW F850GS motor
11625
BMW Motorrad has presented a new 9Cento concept at the "Concorso d'Eleganza Villa d'Este 2018" motor show on Lake Como, Italy.9Cento means Concept 900. The design of the concept is very progressive and futurist... 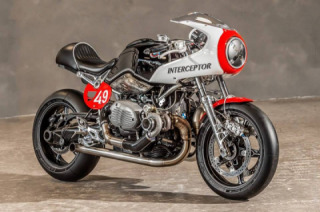 BMW R nineT Bi-Turbo « Interceptor »premiere
5013
It happened during the presentation evening of the BMW X5 (also called The Boss) organized by the BMW Pelras. Born in 2012 and loved by two-wheeled enthusiasts, this premium brand deal unveiled a unique creature the BMW ... 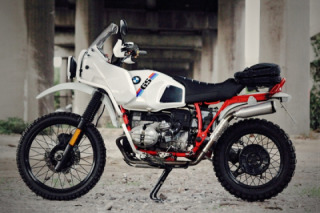 BMW R100GS by Karoo Bespoke Motorcycles
7150
In those days, the BMW R80G / S was so popular that the Bavarians did not fail, releasing the new BMW R100GS. The larger motor and upgraded final drive have become big plusses, although its appearance is not so attractiv... 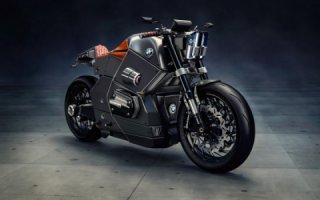